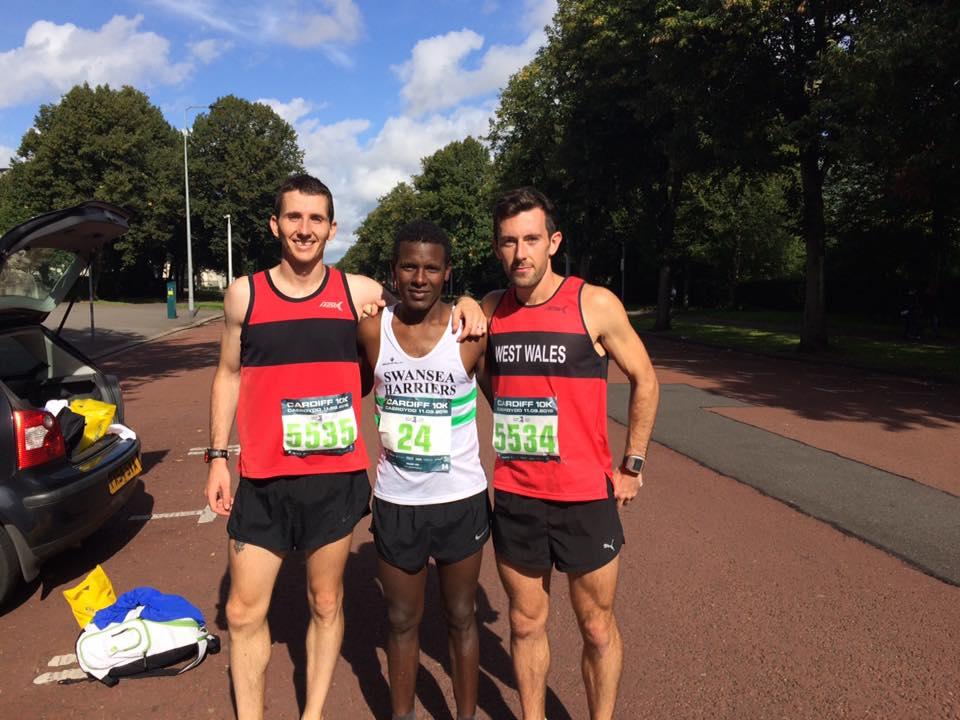 After the disastrous performances in my most recent races I decided to go back to basics. The plan was to do four solid weeks, looking ahead and trying to salvage some fitness for Cardiff Half Marathon. I would run more miles. The pace wasn’t important. I wanted to spend more time on my feet, and build up my endurance base again. The week after Port Talbot I was running lots of 8 minute miles, which is about a minute per mile slower than my usual easy runs. I also started running 11 minute miles. This was not part of my back to basics plan but my girlfriend Vicki decided she wanted to go for a run, and I said I would keep her company. Vicki has never been sporty. She doesn’t run, and I have never put pressure on her to do so, despite believing that running is beneficial to almost everyone. We went slow, but we didn’t stop. She managed a 5K on her first outing. I was very impressed, and she was delighted.

I also decided to introduce lactate threshold runs in to my week. I decided to do these by feel. Running just slower than the point at which I could feel lactate accumulating. This was slower than my usual tempo running, but I felt I was recovering much quicker. I also removed recoveries from these tempo sessions, and did steady running between the lactate threshold paces efforts. Sessions included 10 x 5 mins and 3 x 10 mins. The pace was between my marathon and half marathon pace.

I trained with the Swansea Harriers once a week, and did interval type training which is essentially a VO2 max type session. Not forgetting a long run, which I always see as the foundation of my week. My first two weeks consisted of:

You can look at my Strava if you are interested in any of the details.

I was starting to feel some fitness come back towards the end of my second big week, so I decided to run the Pontypridd 10 mile race. It is a low key race run by a local running club, Pontypridd Roadents. The course has a big hill near the start, and there was no pressure on time. I decided to go and run the race, but not flat out. I was in need of a confidence builder. The race went well. I sat on second placed Paul Graham for 7 miles, and then put in a brief surge, before running in a fairly comfortable 2nd in 55:47. Paul had destroyed me over 5K a couple of weeks previously, so it was nice to show some form. I was never in contention for the win and former two-time Commonwealth Games and pro-boxer Matt Edmonds ran in an impressive 54 minutes. The race was exactly what I needed. My heart rate monitor said I averaged 176 bpm, which is less than I would expect for a hilly 10 mile race. So it confirms that there was more to give. Additionally there were a lot of miles in my legs going in to the race, so all the signs were confirming that the back to basics approach was working.

Going in to my third week my plans had changed. I had decided against running the upcoming Cardiff 10K due to a lack of form, but there was a spot going on the West Wales team and that was all the motivation I needed. However, I made the decision to keep my training levels high and resist the urge to freshen up for the race. Too many times I have tried to taper for every race, and you end up failing to get any decent weeks of training done.

Apart from my sessions my mileage was super slow. Vicki and I went for a couple of runs. She had now shown huge improvements in her performances already. After taking minutes of her 5K time, I surprised her with a PB card and gift. She is now the proud owner of a Garmin watch, so she can be a running geek like myself. I also went out for 10 miles with my friend Chris, who is training for the Cardiff Half. At 9 minute miling it was a much slower pace than I’m used to but I don’t believe in junk miles. I always see improvements from time on my feet.

By race day I had clocked nearly 70 miles. I was hoping two easy days leading in to the Sunday would be enough for the legs to play ball. Standing at the start line, I was excited to be racing in a big event again. It had been too long.

The race was a dream. I started slower than I normally would for a 10K and eased in to the race. I felt good aerobically. My legs felt heavy but I was still running at a PB pace. I started picking off runners. Working my way through the field. I felt confident. I told myself that the pain would come soon. When the pain arrives embrace it I repeated. My legs were hurting but my breathing still felt good. The initial plan was to run 5:18 per mile and run inside 33 minutes. The watch was telling me that I was averaging 5:12 pace.  I didn’t want to ruin this. I pushed on, and finished the race with a sprint worthy of a few places. 32:20, and a new PB. I felt amazing. No one had passed me during the race. That was a great run I thought, but had I pushed hard enough? 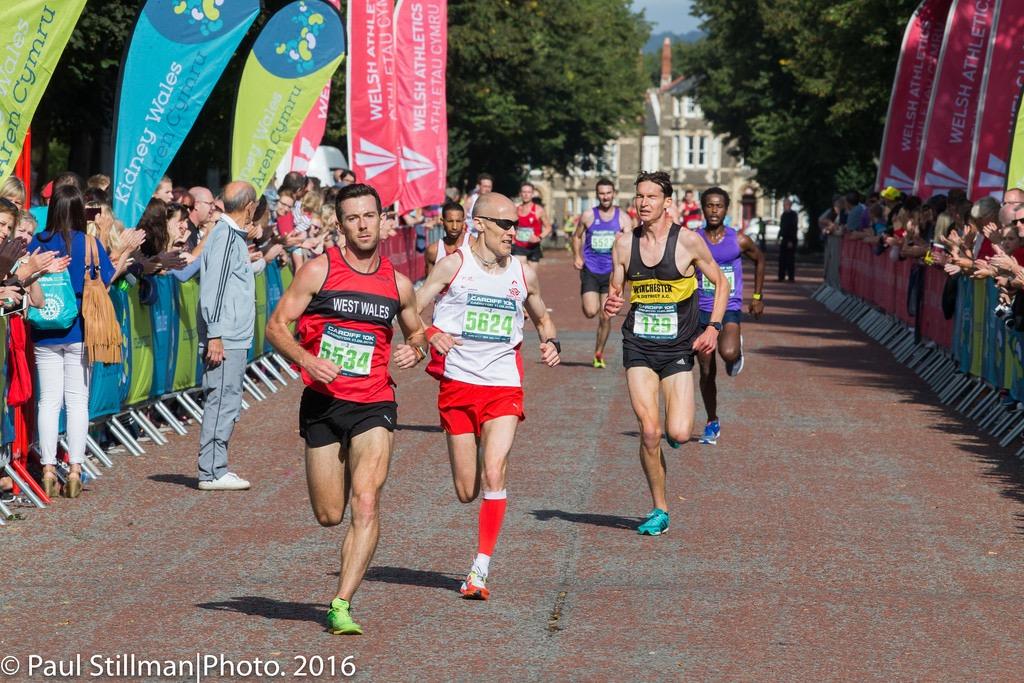 Soon after finishing I found the other Swansea Harriers who had travelled to Cardiff in my car. Ian was in the form of his life and had also run a PB, going sub 33 minutes for the first time. We asked Danal; a very talented Eritrean addition to our team; how he got on?

That’s amazing we exclaimed. “Brilliant running Danal, what place did you come? What position?” Danal speaks some English but didn’t quite understand what we were asking. A friend of his translated our question.

“The win” he responded.

Wow. What an incredible achievement from our friend. He seemed so nonchalant about the fact he won. I admired the fact that despite winning he was already analysing his performance. He wants to go quicker. A PB and a win is good, but he knows he can go faster.

The journey back was a jubilant one. Everyone had done well. I love it when the team runs well. It’s a great feeling when everyone’s hard work has paid off.

Again, I told myself the aim was Cardiff Half. I didn’t back off. By the end of Wednesday I had run 65 miles. However when it came to Thursday’s tempo session I didn’t feel right in the warm up. I decided to leave it. I ran an easy 4 miles instead.

On the Friday I went out again and it felt easy but I was experiencing pain in my glute. The pain persisted after my run. I did loads of stretching to try and ease the pain, but on Saturday it was feeling even worse. I made the decision to end my run streak, and give my body a whole day of rest, in the hope that I could avoid injury and still run on the Sunday.

Well on the morning of the Swansea 10K, the pain in the arse seemed to have disappeared. I was fresher than I had envisaged due to the easy few days. I had already stated my plan for the race. I was to try something new. Go out hard and see if I can hold on. The more pain the better I reiterated.

Well I certainly went out hard. My first mile was in 4:49, and yet I still couldn’t catch the group ahead. I could feel the headwind forcing me back, and was desperate to reach the shelter just ahead. But I couldn’t. Instead I spent the first 5K working hard in to the wind alone. I went through 5K in a PB time of 15:55. How the hell have I been unable to break 16 minutes in a 5K, and yet I can run faster than that in to the wind during a race double the distance?

I knew the wind would be behind me for the second 5K, but I was starting to struggle. A few boys came past me, and I knew this was a bad sign. I started to repeat the following mantra in my head:

“If you want to have a good day, suffer now and enjoy it later”

I could see my average pace slipping away from a potential sub 32 minute run. I was hurting. Top athlete Angus Maclean came past. I tried to go with him but my legs were fading. For the rest of the race I tried to keep an honest pace and keep Angus in sights. I started to reel him in late on but even with a sprint finish I couldn’t quite catch him. 32:31 and 19th place.

It wasn’t a great run, but I had taken a chance early on. I was happy that I had taken a risk and although it didn’t pay off, I had given a sub 32 minute run a crack. Danal had placed 3rd; behind two Runfast Kenyans; with a time 17 seconds slower than the previous week. So maybe the course and conditions were slightly slower. 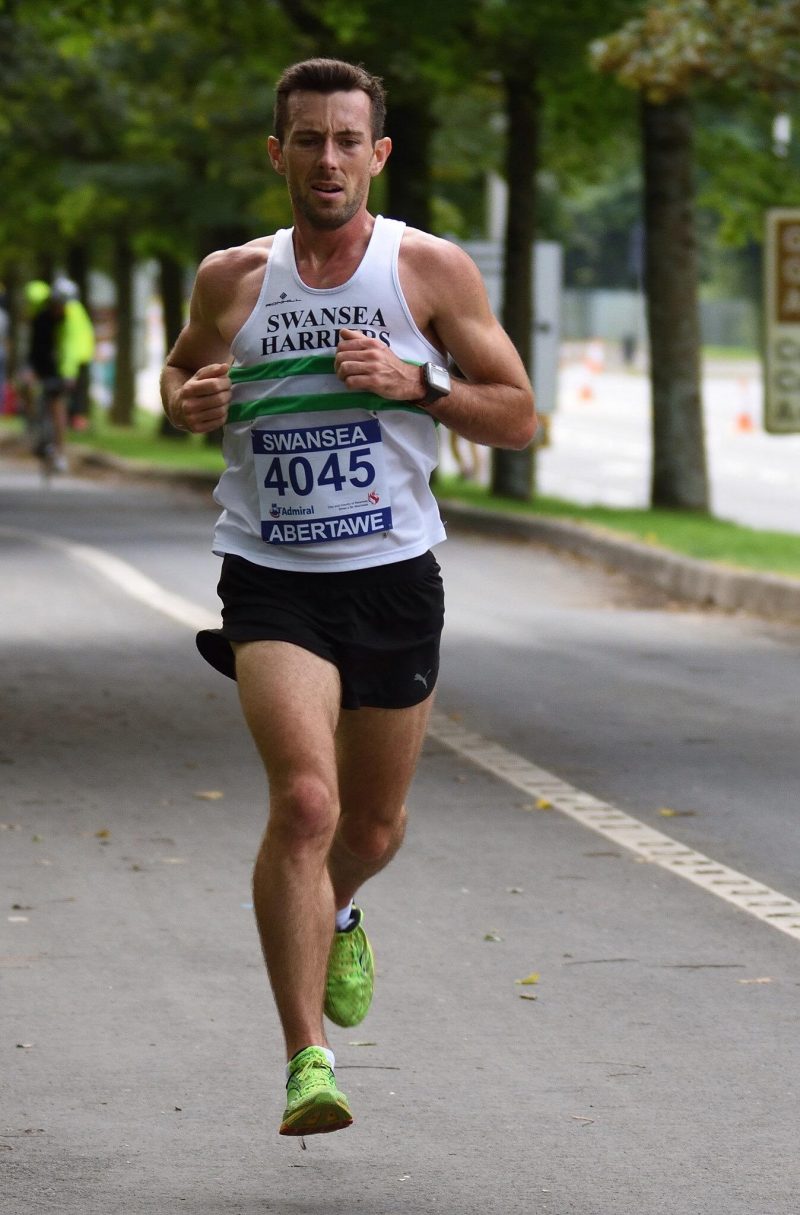 My training for the second half of my four weeks ‘back to basics’ training block looked like:

So despite not hitting my 100 mile weekly target for weeks 3 and 4, I was able to run two sub-33 minute 10Ks, whilst also fitting in the sessions with the Swansea Harriers, and finding time to get my long runs done.

I am very pleased that I have been able to go from two of the worst performances, and a huge lack of fitness, to running PBs on tired legs. It has also been great to see Vicki progressing from a complete novice to completing her first 10K training run comfortably in 72 minutes. The best bit has been seeing her enjoy running. It is always tough starting something new, but she has stuck at it, and is reaping the rewards. Selfishly, I love getting to spend that extra bit of time with her too, and sharing something that is a huge part of my life. 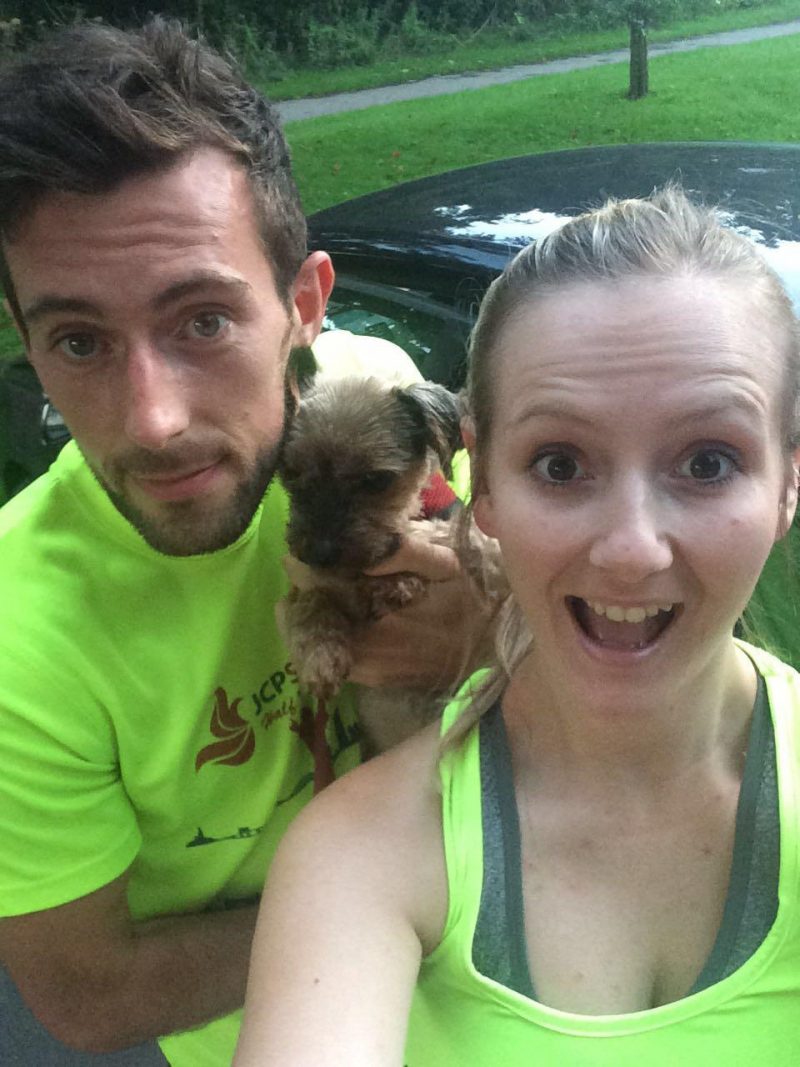 In summary, I have pulled my finger out this month and have put myself in good shape to run well in Cardiff Half. I can’t wait. Now all I need to do is decide whether I should go out hard and hold on, or try and run consistent splits?